Almost 200 students turned out for the school dance for The Headbangers’ Ball – dance for Concussion Education, which made it one of our school’s largest dances ever. Boys and girls alike wore sport-themed shirts; and along with dancing all night, the kids were actually very willing to cooperate in the educational part of the event. By school tradition, each grade enjoys their refreshments in shifts in the hallway outside the dance.  As the kids lined up to eat, Katherine explain what they were to do to “obtain” their food. She pointed out the CDC posters that lined the hallways and told them before they could select their snacks from the table of goodies, they had to tell a parent volunteer one sign or symptom of a concussion. The kids read the posters and seemed to enjoy the process. At what other party can you say, “throw up” to an adult and then get a cookie? (Sorry, but they are middle schoolers and gross is cool to them).

Katherine then chatted with the kids in small groups as they ate their refreshments and answered their questions about concussions. As she suspected, the kids seemed to fall in two distinct groups – those who had had concussions and knew most of the facts, and those who had never had one and didn’t know anything about a concussion. What was surprising was the number of kids who had already had concussions for a dance of mostly 6th and 7th graders!

As parents’ cars lined the parking lots and kids prepared to leave the dance, they were handed a ticket to vote whether they learned something new about concussions. The exit poll results showed that 84% of kids voted that they learned something new about concussions at the dance. At the door, each child was handed a CDC info sheet on concussions and asked to hand them to their parent waiting in the car. Hopefully the hand to hand delivery helped avoid the dark hole which seems to appear in most middle school students’ book bags. To reinforce the information on Monday and to reached students who did not attend the dance, several students made morning announcements to the whole school with concussion facts and information. 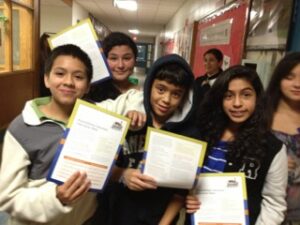 The mix of education and fun seemed to work well and we can encourage other schools to do the same type of education/fun event around this important topic.