The IOM and the National Research Council formed an expert committee to review the science of sports-related concussions in youth from elementary school through young adulthood, as well as in military personnel and their dependents. The committee’s report recommends actions that can be taken by a range of audiences – including research funding agencies, legislatures, state and school superintendents and athletic directors, military organizations, and equipment manufacturers, as well as youth who participate in sports and their parents – to improve what is knows about concussions and to reduce their occurrence.

The report finds that while some existing studies provide useful information, much remains unknown about the extent of concussions in youth; how to diagnose, manage, and prevent concussions; and the short- and long-term consequences of concussions as well as repetitive head impacts that do not result in concussion symptoms.

Bad News…      There is no mention of any funding.

Good News…   Here is who sponsored the IOM Report: 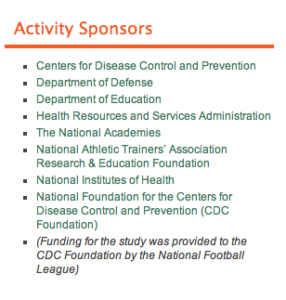 Bad News?   Here is who the IOM Committee recommends to lead the effort… NCAA is not well thought of by many concussion field. In March, I had a face to face conversation with Mark Emmert NCAA President where I asked about limiting full contact practice in the NCAA schools to match the NFL and Ivy Schools reduced schedule, and he told me there wasn’t enough evidence and there needed to be more studies before he felt he could act. I am wondering if the many lawsuits are helping to motivate him to move on something here?

I am going to contact the NFHS and ask how they see their role in the future. Here is what the NFHS said.

Good News…   We now have a National Sports Concussion Coalition.

Bad News… This coalition was not mentioned in the IOM Report.

Good News... This week we do have two new reports – a very informative the IOM Concussion and Youth Sports Report with ideas and recommendations along with the new road map for schools in APP report on Concussions and Schools.

Bad News… There doesn’t seem to be any funding mentioned in either report to fund any of these recommendations.