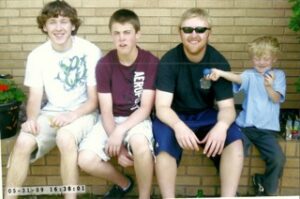 His name is Carson Barry and he is 12 years old. Carson has been researching concussions for over two years since his brother, who suffered several hockey concussions, committed suicide.

Carson lives in Butte, Montana, and plays on a youth hockey team. He is the youngest of four brothers; and in this photo from 2009, the boys sitting left to right are Tanner, Cullan, Travis, and Carson.

Born into a hockey family, Carson was on skates by the age of two and as soon as he was old enough, he began to play youth hockey like his older brothers had done. In this photo, Carson, age 2, being helped by brother, Cullan, and his mom, Christine. This day was Carson’s first time on skates.

I first learned about the Barry Family from Christine Barry’s post on TheConcussionBlog.com, Sept. 17, 2011:

Our son, Cullan Barry, died from suicide May 13, 2011. He was a hockey player and had received a concussion on Feb 26, 2011; but in Dec 2009, he also had been sent to the hospital by ambulance following an illegal hit in the back that sent him down like a rag doll. They did a CAT scan of his head said it was fine and focused on his knee that had hit the boards. He was off the ice for six weeks with the knee injury but had ongoing migraines. No doctor every told us that ongoing migraines could be tied to a brain injury form the hockey hit, no doctor ever told us to watch for such things.

His grades dropped he had difficulty with insomnia with fatigue, with concentrating on things like English and math, but we kept thinking his migraines were food-related. Now I believe the headaches, insomnia, and fatigue were all related to that big hit injuring his brain and other hits in hockey continuing to injure his head. However, doctors assured us the CAT scans were fine.

At the Feb. 2011 (ER visit), the ER doctor did not even come into the room to check him and just told the nurse what to do and say. We were given standard do not play for couple weeks and he was released with no discussion of symptoms to look for of ongoing brain trauma. Cullan had a migraine the night he died. I think ER doctors need to be greatly more informed about concussions and parents of athletes need this information about post concussion syndrome, brain injuries caused by multiple impacts over time.

I reached out to Christine, Carson’s mom, to hear more about her son, and we spoke on the phone about Cullan’s life, his tragic death and wondered what role concussions may have played in his decision to take his life. We promised to stay in touch.

Christine wrote me in the Fall of 2013, and asked me to participate in her youngest son’s science fair project. I offered to help Carson with the project which was a Facebook survey about suicide and contact sports.

Thank you for your help with Carson’s survey.

So thank you for your responses to his survey.

I have included the graphs of his results which he, I and evidently the judges found jaw dropping: 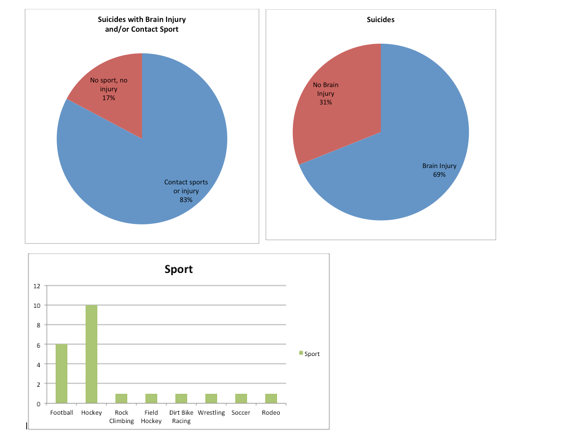 The best of all this is he is already planning what he wants to do for next year which is he wants to get helmet sensors and measure how hard an impact can cause a concussion and how hard of an impact would cause kids to report symptoms to coaches or parents. He wants to use his hockey team, 10-12 year olds. This would give impact results on much younger kids as most research is on college or pros and would also give some insight into reporting tendencies of children in sports.

So do you have any ideas about what helmet sensors would be the best? There are several out there including one that has a phone app to alert when a kid may have had too hard of a hit or need a concussion eval.

I was excited to see if I could help Carson and reached out to some sensor people I knew. But first, I asked Carson to write me a letter explaining what he wanted to accomplish so I could pitch his project to some sensor companies. These research-grade sensors are extremely expensive and I needed evidence that this 12 year old was a serious researcher and not like my own kids who just hit my sample sensors with baseball bats.

Here is a letter I received from Carson explaining his project:

My name is Carson Barry and I have been researching concussions and a possible link to suicide for my school science projects for the last 2 years. I am 11 years old and I go to Silver Bow Montessori School in Butte Montana. 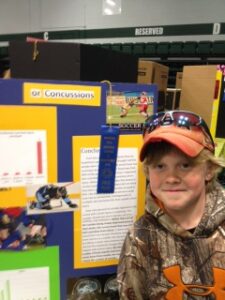 Last year for my fourth grade science project I surveyed 3 high school hockey teams about whether players had experienced concussions, how many concussions, what symptoms they had and how long it took for them to be symptom free.  I found 27 players who had concussions or a whole hockey team.  Contrary to what my brother had been told by doctors who treated him that it would take about 2 weeks to heal from a concussion, I found it was taking the hockey players an average of 3- 6 months to be symptom-free and several players were still having symptoms after a year. I also found that 67% of the players reported that they had thoughts of self harm while recovering from their concussions.

The fact that 67% of hockey players recovering from a concussion had thoughts of self-harm seemed very alarming. I thought someone needed to research whether a brain injury was a suicide risk. So this year for my fifth grade science project I put a survey on Facebook asking people who had lost a loved one to suicide if that person had a previous brain injury and if they had played a contact sport where they could have had an unreported or misdiagnosed concussion. My results found that 70% of the suicides had a previous brain injury. When I added in suicides who had played a contact sport the number jumped to 84%. This again was alarming. I felt that if these athletes could better identify when their brain is injured,  better report their symptoms, or be better treated for the injury these deaths could be prevented.

For my science project next year, I would like to research what force or impact it takes to cause a concussion in youth athletes. I want to compare the impact force to when and what symptoms a player reports. I want to see if players tend to under report or brush off symptoms compared to when an impact sensor says they should be evaluated.  I would like to use helmet sensors on my PeeWee hockey team (ages 10-13).  Then I would like the players to fill out symptom checklists after a game and for the next week.  Most impact helmet sensor research has been done on college or pro athletes and I think it is the younger athletes’ brains who are more fragile. I think my findings can help players protect their brains and reduce their risk of suicide.

I was wondering if your organization could help me get helmet sensors for my project. My hockey team will have 10-12 players next season.

I can be reached at my Mom’s e-mail at

Thank you very much,

With Carson’s letter in hand, I reached out to Danny Crossman CEO of Impakt Protective to see if his company could loan Carson research-grade quality sensors. Danny agreed to help and would able to loan Carson some sensors when the UPMC researchers were finished with their project thus Carson’s project was set for the fall of 2014.

Working with sensors is not easy for adults, and Danny cautioned me this would be a difficult project for a young researcher:

“Carson should know that studying one team of 10-12 years olds (15-20 kids) wont yield a lot of data (usually 2-3 hits over 40g per contact game) and certainly won’t yield a lot of concussions (probably 3-5 per season at most).”

But Carson was determined, so the now the wait for the sensor began.

In October, we got the good news from Danny…

20 Shockbox sensors will ship out to you this week for Carson to use. They are used (during a University of Pittsburgh hockey study) and  will come with chargers and user cards. They are the HD-R (research) version and are equipped with a gyro to measure rotation (this is an estimate since it is hard to do accurately) and a 3-axis accelerometer to measure linear peak g (this is the standard measurement for head impacts).

I was so excited for Carson to have the chance to fulfill his dream project and I wanted to stay in the loop so I asked Christine and Carson to send me photos and progress reports on the project.

I am sure he would love to send you updates, it would be good for him to log as he goes for his project

anyway. He was cute as we were driving home from school, he saw a UPS truck and said “Oh I bet they have my sensors, hurry Mom we have to get home!” And indeed they arrived about 30 minutes later. [The photo is Carson with the newly arrived sensors.)

After a great deal of work learning how to use [including charging, syncing, recording data, and understanding the results] the sensors and convincing adults and kids to participate in the project, Carson used the sensors for 7 games total for his project. Not once did a ref ask about them 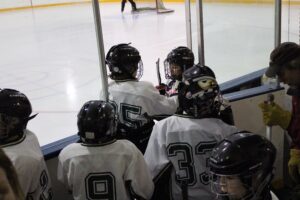 so refs didn’t even really noticing them. I did not tell the refs prior to games they were wearing them and I was a bit leary of refs questioning them but they did not seem to even notice. I did ask the MAHA board if they could wear them in league games, they asked if they enhance performance? I had to explain them to the board and then they said no problem. 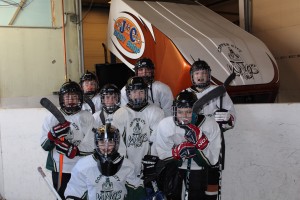 Here are some of the boys right before they head to ice, right after putting sensors.

[For more about the Carson’s results, stay tuned to my next post]

Carson worked very hard on his project and his efforts paid off. Last week, Carson won a blue ribbon and a gold medal at his school science fair then top fifth/sixth grade science project and $50 at regional fair. There were 450 projects at the fair of which half of those fifth/sixth grade projects so he did very well said his proud mom. 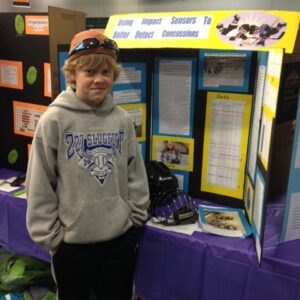 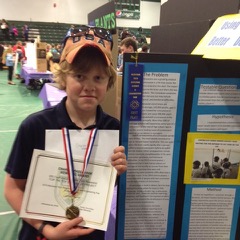 Note the red hat that Carson is wearing in the picture. This hat belonged to his brother, Cullan. Carson’s mom can rarely get Carson to take the hat off and is getting very tattered now. Carson’s grandfather bought the hat for Cullan when he went to a USA hockey conference. Carson has adopted it and worn it quite religiously since Cullan died.

Carson promised his mom he would take it off when speaking to the judges, but as you can see  in the photos he wore it both before the judges came and has it right back on after they left.

I look forward to hearing the next report from the Montana State Science fair to see how many more people are touched by this amazing young researcher.

Carson will be presenting his project at state fair on March 16 and  17; and March 17 happens to be Cullan’s birthday.

[If you want to congratulate Carson, please leave a comment below and I will forward to his mom]